A family had an incredibly lucky escape recently when a large branch sheared off a roadside tree and crashed through their car windscreen as they were driving along a road in Staffordshire. There were three people in the car – an 8-year-old girl and 2 adults, and they were travelling along Rugeley Road in Cannock Chase. The adults, seated in the front of the car, were extremely lucky to escape without serious injuries, as the branch actually passed between them before hitting the young girl who was the back seat passenger. An ambulance and a paramedic attended the scene, but after seeing that the girl had suffered puncture wounds to her face and a broken arm, the Air Ambulance was called and the girl was airlifted to the Children’s Hospital in Birmingham, where she underwent treatment in the Major Trauma Unit. 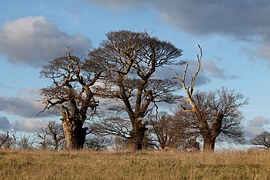 As it happens, I am familiar with this picturesque area of Staffordshire, as I used to go camping nearby in my old VW campervan. Rugeley Road has a large number of mature trees on either side, and in some places it is a little like driving through a tunnel or an archway under the leaves. This particular group of people were unlucky enough to be underneath one of these mature trees when the large bough became detached, and one end drove itself straight through the front of the moving car.

The damage from the falling branch actually wrecked most of the front and roof of the car, as well as smashing the windscreen, so was clearly a freak and terrifying accident, and the end result could have been a whole lot worse. I sincerely hope that the young girl recovers totally (and quickly) from her injuries, and that the parents get over the shock.

This incident got me thinking about the question of who is actually responsible for ensuring the safety of trees that are growing over the highway.

I did a little research, and found that if the tree is growing on the actual roadside verge, and not within a hedgerow or a field boundary, it is usually maintained by the local authorities. They are responsible for ensuring that the tree is unlikely to fall into the road, and that there are no visibly unsafe limbs which could fall and cause an accident. However, if the tree is growing within a field, a hedgerow or in a ditch on the road side of the hedgerow, it is the responsibility of the owner of the adjacent land to maintain the tree.

Whoever is responsible for the tree, they must ensure branches (even when wet, which can cause them to droop), are at least 2.5m higher than the road, and they must maintain a vegetation-free 1.2m width to any footpath.

We may never know what caused this particular Rugeley Road tree incident, but it has certainly made me more vigilant when driving under overhanging trees, especially when the weather has been rather windy or stormy.