How a Windscreen Chip Became a Crack in Just 48 Hours

You are probably familiar with the advice given by windscreen repair companies, that warns motorists to take immediate action on a chipped windscreen ‘before a chip becomes a crack’. Well, here is an example of where that is exactly what happened to the unfortunate owner of a 2016 BMW X5. The car had developed a small star chip on the windscreen due to the glass being hit by flying road debris. If the owner of the vehicle had called out a member of the myWindscreen network to carry out a windscreen chip repair as soon as the damage was noticed, the job would have taken about 30 minutes, the cost would have been just £45, and the windscreen would have had an invisible repair and be as structurally strong as before the damage occurred.

However, the car owner ignored the damage, continued to drive the car, and just 48 hours later, that small chip had developed into a large crack. Windscreen cracks of this type and size cannot be repaired, and so the entire windscreen now needed to be replaced, at a cost of just over £500. Naturally, windscreen replacements take much longer than repairs, so the entire job had grown in cost, time and inconvenience for the car owner. What a difference a couple of days makes! 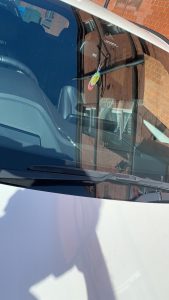 We all pay for insurance claims

As it happened, the car owner had windscreen cover on his car insurance policy, so the cost of the windscreen replacement was covered, and he only needed to pay an excess of £80. In reality though, it would have been quicker and cheaper for the owner to get the repair done before the damage escalated. Also, as we know, when anyone claims on their insurance, that cost eventually gets spread across all policyholders in the guise of increased premiums, so we all end up paying. Whichever way you look at it, a windscreen replacement is always more costly, time-consuming and inconvenient than a repair.

Oh, and by the way – it’s not only the danger of a chip becoming a crack that means you need to act quickly if your windscreen suffers some damage. Firstly (and most importantly) damage in the critical area of view could render your car illegal and your insurance invalid. Secondly, the more quickly a repair is done after finding the damage, the less visible the finished repair will be. If you let a chip (however small) fill with rain and dust, it will be hard to clean it out completely before filling it with repair resin, and the final repair may remain visible due to the contamination.

It always makes sense to act quickly if your windscreen gets damaged, so contact a member of the myWindscreen team today, and get an invisible windscreen repair, fast.

Copyright 2020 © myWindscreen® is a registered trademark, and a trading name of Interactive Network Limited. We are registered with the (ICO) Information Commissioner's Office (ZA177158). All rights reserved. All logos, names and trademarks on this website belong to their respective owners.